Customers flying mid haul in British Airways premium cabins can now pre-order their main in-flight meal up to 24 hours before they fly from London Heathrow. The new service, already enjoyed by those travelling long haul, allows customers to select their main meal via the Manage my Booking page at ba.com within 30 days of their flight’s departure, with starters and dessert choices continuing to be taken on board. Those who choose not to take advantage of the service can continue to choose their preferences on board as usual. 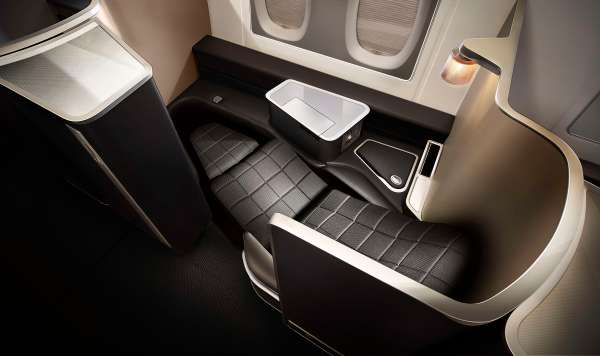 Now is your chance to experience in First, the height of British Airways luxury. This unforgettable experience is available for free when you book selected return flights in Club World.

The First cabin allows you to relax in exclusive First lounges and enjoy complimentary spa treatments before their flight. Once on board, you can unwind in the comfort and privacy of your own spacious on-board suite with fully flat bed and dedicated service.

This offer is available on as many flights as you like when you travel outbound by 9 April 2016 and return by 16 April 2016. Contact JTA Travel Management for further information, terms and conditions.

Starting from 27 May 2015 BA will be introducing new methods of earning and redeeming Avios to its “On Business” programme members. As part of the changes earning points will be based on the amount spent on tickets instead of depending on the distance travelled. The airline announced it will be closing the current programme on 24 May 2015 at 23:59 with all points balances to be doubled during the transfer.

As British Airways introduces improved Business Class amenity kits, Club World passengers are soon to enjoy an improved selection of products allowing them to arrive to their destination refreshed and revitalised.

Containing Elemis products, including pro collagen marine cream, pro radiance hand and nail cream and lip balm, as well as an eye mask, socks, a pen, earplugs, a toothbrush and toothpaste, the new Club World is thoughtfully designed to also be used as a bag to hold loose items.

Starting from 01 March 2014, the airline will also be launching the service on flights between London Heathrow and Atlanta, Denver, Boston, Philadelphia, Chicago, Baltimore, Toronto, Montreal and Calgary.

As the airline extends the service, BA’s First, Club World and World Traveller passengers will soon be able to pre-order their meals on a selection of 21 routes.

British Airways customers will have an opportunity to take advantage of direct access to trains to and from central London as the airline announces it will be moving to Gatwick’s South Terminal in November 2016. A new BA check-in area and Executive Club lounge will be constructed at the South Terminal as part of the move. Currently the airline operates from Gatwick’s North Terminal.

With the opening of the new refurbished British Airways lounge at Amsterdam’s Schiphol airport, customers can now take advantage of an improved range of facilities.

The lounge offers guests an opportunity to relax and enjoy some light bites as well as complementary wines, spirits and soft drinks at the new deli area. While those in the mood for work can take advantage of wireless printing and the availability of power points at most of the seats.

Starting from 14 January 2015 British Airways customers making new bookings in Club World can take advantage of a special First Class upgrade offer. To qualify for the promotion customers must book their Business Class flights by 13 March 2015. Outbound travel dates have to be between 14 January 2015 and 11 April 2015, with all travel to be completed by 18 April 2015. For more information about the promotion please contact the JTA Travel Management team on 0121 508 5544.

Starting from the end of June passengers travelling from London City will be able to take advantage of new seasonal routes to Mykonos and Santorini operated by BA CityFlyer. Both routes will be serviced by the airline’s Embraer 190 in a two-class configuration, with flights to Mykonos available four times week between 29 June and 06 September 2015 and flights to Santorini operating two times weekly between 30 June and 04 September 2015.